Jordan is a Helpdesk Level 2 technician who is approaching his one-year anniversary with TechSolutions. He has always had a passion for the world of technology, and knew it was the field he wanted to be in. Jordan has worked in the field for many years, with experience at Best Buy, Samsung, and Google. With tech being his focus in life, TechSolutions was the next logical step for Jordan to take with his career.

At TSI, Jordan’s role includes a multitude of important tasks. He assists with server administration, cybersecurity, and on-site project work and troubleshooting for clients. When asked what his favorite part of the job is, Jordan responded with “I love the exposure to all the crazy new technology we get as techs in the field. I also love the fast-paced environment and the ability to make meaningful connections with our clients.” He loves putting a smile on clients’ faces by assisting them with the technical needs, and he enjoys going out in the field to do hands-on work.

When he’s not at work, Jordan engages in tech news and trends. He’s also an avid coffee drinker who loves playing Magic: The Gathering as well as listening to music. Currently, his favorite band is Magic City Hippies. 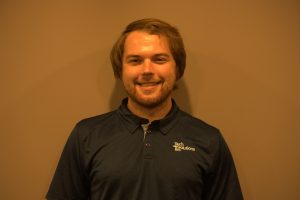 Conor is one of TechSolutions’ Helpdesk Level 2 techs, and he has been with the company for just over a year. His love of the IT world began in high school, and he knew it was what he wanted to pursue even though some friends and family suggested another career path. His high school, La Salle, has an excellent IT department and provided him with a solid base understanding of working with Microsoft operating systems and programs. Conor’s time in the program from high school solidified his desire to enter the field. He then attended Elizabethtown College, where he received a bachelor’s degree in Computer Engineering.

At TechSolutions, his role is based on helping people and supporting our clients. Conor works on tickets that come in daily, which range from onboarding a new user or computer to larger tech issues. He states, “My favorite part of my role is being able to assist clients, especially when you finally solve a tough problem and get that good feeling that comes from helping others.” The mix of proactive and reactive work he does keeps him on his toes and makes every new day a different challenge.

In his free time, Conor plays volleyball and soccer in the community. He also works as a member of the ski patrol at Jack Frost Ski Resort in The Poconos during the winter. He especially enjoys ski patrol, as it combines his love of helping people and being outdoors.